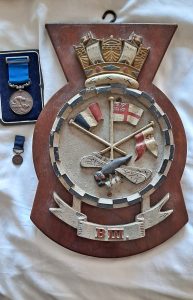 George Clampitt, having been awarded the LSHS medal in 1936 for Gallantry in a life saving attempted rescue whilst as a Merchant Navy Officer, went on to Command H.M.S. Jasper and other smaller vessels before Commanding H.M.S. Narcissus in the renowned B3 Group,Western Approaches with the Free French navy and Polish navy. He was awarded the French Croix de Lorraine and the Croix de Guerre with Silver Star for valuable service with the Free French. He later commanded the LST 77 in the Adriatic and Mediterranean. Post WW2 he returned to the Merchant Navy.

George Thomas Sidney Clampitt was awarded the Liverpool Shipwreck and Humane Society Bronze Medal on the 2nd day of December 1936. His decorative scroll cites he be awarded the Society’s thanks along with the Bronze Medal “in recognition of his courageous efforts to rescue a man who was drowned while bathing at Hamburg on July 7th 1936″.  A newspaper clipping reporting this award also records that Chief Officer of the S.S. Lagosian G.T.S. Clampitt with 2 others had tried to rescue the fellow crew member. 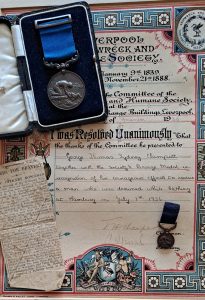 After WW2 as Master of the S.S. Kaituna he features in several newspaper articles when he docked in Wellington, New Zealand. When he arrived in Wellington, he “reached out” through the papers to ex NZ servicemen he had known during his wartime service on the L.S.T. 77 to hopefully meet up for a re-union whilst he was in port. These newspaper articles intriguingly refer to him as “Oncle Georges” who, reportedly, had a 50,000 Franc bounty on his head and they give a brief outline of his wartime service. In the Adriatic, on LST 77 he had carried thousands of refugees, food and ammunition and landed partisans, in some reports.

Whilst in Wellington NZ he met with local renowned artist Peggy Toswill (Spence-Sales) and she drew the sketch as seen in the clipping in which he is wearing the Free French badges.

Artefacts: SUPERB and RARE large B3 Flotilla Plaque. Metal on wood which features the White Ensign, French and Polish Flags and a Bee above BIII on scroll. A carved wooden plaque ( by Clampitt ) featuring a cigar smoking Winston Churchill with a photograph showing Clampitt, in uniform, carving a piece along with a newspaper cutting describing same. Framed 1946 Admiralty letter confirming the award of the Croix de Guerre with Silver Star for services with the 1st French Corvette Division.

d) Admiralty letter dated 23rd May 946 – confirming his release from service and thanking him for his service to the Royal Navy during the War. 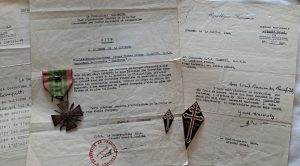 George Thomas Sidney Clampitt was born 1908 in Birkenhead and died at Hawkmoor Chest Hospital, Bovey Tracey near Newton Abbot, South Devon 1962. He was living in Hele Road, Kingsteignton at the time of his death.

Altogether a superb group to a man of many talents and brave service that merits deeper research.

Payment by Bank Transfer preferred, payment by card is available. PayPal is not available and any attempted payment will be returned unless an additional 5% is added to cover their costs.