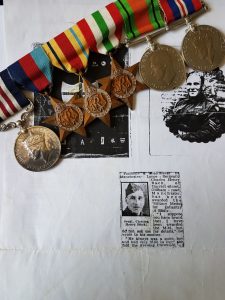 Military Medal, 1939/45 Star, Africa Star, Italy Star, Defence Medal, War Medal, swing mounted on a bar.
Military Medal named to 1081254 L. SGT. C. H. BACK. R. A.
Announced in the London Gazette, For the Sicily Campaign, 18th November 1943 pp 5062.
The Citation for the award of this Military Medal, typed on to embossed Staff paper, is as follows:

On 10th August, 1943, L/Sgt. Back was N.C.O. in charge of a party laying a telephone line to an O.P. on Mount Rivoglia near BRONTE.
During a period of intense and accurate mortaring of the O.P., this N.C.O., on his own initiative and quite regardless of his personal safety, maintained the O.P. line himself and repaired five distinct breaks in the line cause by enemy shelling. He thus re-established the vital communications between the O.P. and guns and enabled his O.P. Officer to continue with the direction of the fire of his Battery.
Later, at a time when enemy fire was particularly heavy, he volunteered to take over the duties of the O.P. telephonist and calmly and accurately relayed the fire orders, until the line was again cut, whereupon he went out himself once more and repaired the break.
Throughout the day L/Sgt Back set a very fine example of personal courage and devotion to duty.

The group is accompanied with a copy of a newspaper cutting which has a photograph of Lance Sergeant Back with the following text.

“Formerly a chairmaker in Manchester, Lance Sergeant Charles Henry Back of Garratt Street, Oldham Road, Manchester has been awarded the Military Medal for gallantry on Sicily.
I suppose you have heard that I have been awarded the M. M, but do not ask me for details he wrote to his mother.
He always was a quiet boy and had very little to say, she told the Evening Chronicle.”