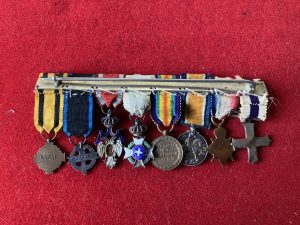 Summary of Service
Born on the 16th November 1880, Theodore Joined the 3rd Battalion Oxfordshire Light Infantry (Militia) as a 2nd Lieutenant on the 9th February 1898 and In April he sat and passed the Militia Literary Examination, earning him admission to the Military Competitive Examination (Those passing this exam earn a commission in the regular forces). Theodore was then commissioned as a 2nd Lieutenant in the 3rd Battalion Lancashire Fusiliers (Regular Army) on the 20th May 1899, which indicates he must have passed the Military Competitive Examination.
On the 24th July 1899 Theodore was posted for service in Malta and on the 9th February 1900, he was promoted to Lieutenant. Remaining in Malta until the following year, Theodore was posted for service in the East Indies on the 7th May 1901 and from the 21st May to the 5th April 1902 he was Aide de Camp to Sir Power Palmer.
Theodore then returned to the UK on the 5th April 1902 and joined the 4th Battalion Lancashire Fusiliers. On the 20th June 1903 he was promoted to Captain and on the 1st of October 1906 he married Mary Olive Denny at St. Georges, Hanover Square, London.
On the 1st January 1907 Theodore was appointed Adjutant of the 3rd Battalion, Kings Own (Royal Lancaster Regiment) and on the 5th February 1907 he was appointed as Adjutant of the Militia. Theodore became supernumerary to the Buffs (East Kent Regiment) on the 20th May 1908, however he continued as Adjutant of the Militia until the 29th of the month.
Remaining in service within the UK Theodore transferred to the 3rd Battalion (Kings Own) Hussars on the 2nd March 1912 and on the 9th left for Singapore aboard H.M.S. Borneo. Returning to the UK in 1913, the Regiment which now formed part of the 4th Cavalry Brigade was sent to France on the 16th August 1914 as part of the 1st Cavalry Division (British Expeditionary Force).
Theodore then saw action as Second-in-Command of B Squadron, 3rd Hussars at The Battles of Mons, Le Cateau, The Marne and The Aisne. The Regiment then became part of the 2nd Cavalry Division on the 14th October and subsequently took part in the Battles of Armentieres and Ypres, Winter Operations 1914-15, The battles of Neuve Chapelle, St Julien and Bellewaarde Ridge, the last two being part of the second Battle of Ypres.
On the 12th July 1915 Theodore was Seconded for service on the staff and in December 1915 was appointed Deputy Assistant Adjutant and Quartermaster-General on the Adjutant-General’s and Quartermaster-Generals Staff under Lieutenant-Colonel T.E.L. Hill-Whitson, 14th Hussars.
On the 1st January 1916 Theodore was Mentioned in Dispatches for his services and on the 13th January, he was awarded the Military Cross which he was presented by the King at Buckingham Palace on the 8th April. Note: The Regimental Diary recalls that Theodore was among those mentioned for his services at Ypres between the 23rd April and the 3rd May 1915. During this period the Germans used Chlorine Gas with staggering effect leading to heavy allied losses and bitter trench warfare. It is likely that as Theodore was seconded for service on the Staff on the 12th July 1915 and that there is no further mention of him after this point in time, that his award of the Military Cross was for his role in this action. An Extract of the War Diary for this period of time appears later within this document.
In May 1916 Theodore was appointed Deputy Assistant Adjutant and Quartermaster-General on the Adjutant- General’s and Quartermaster-Generals Staff under Vice Major (Temporary Lieutenant-Colonel) W. A. Fetherstonhaugh, 8th Cavalry, Indian Army. Theodore then saw service in Greek Macedonia, Serbia, Bulgaria, European Turkey and the Islands of the Aegean from the 2nd September 1916 until 11th November 1918 during which time he held several Senior Staff posts within the Cavalry Brigade.
During the above period, Theodore was again mentioned in Dispatches (on the 21st July 1917) in recognition for his services in Salonika, Greece and the Greek Government awarded him the Greek Military Cross on the 25th November, The Order of the White Eagle with Swords on the 13th January 1920, The Medal for Military Merit 3rd Class on the 02/03/1923 and the Order of the Redeemer Commander on the 29th June 1923.
On the 5th February 1919 Theodore was promoted to Major, Acting Lieutenant-Colonel and on the 14th April made Assistant Adjutant General.

In 1921 Theodore now serving in the 19th Hussars departed the UK bound for Bombay and having discovered evidence of an affair, his wife had had whilst he was serving abroad (during the war) he filed for Divorce of his wife. The subsequent hearing was made in his absence and details published in the majority of the press, one such article appeared in the Dundee Courier on the 13th July 1921 (see below).

On the 14th December 1922 Theodore retired as a Lieutenant Colonel and went to live in France. Commuting part of his pension to clear debts he then invested over £600 into a partnership investing in Race Horses in Belgium, however the horses were registered in his partners name and the venture soon turned into a disaster.
In May 1924, Theodore found himself on the other side of a Divorce when having had an affair with the wife of Lieutenant-Colonel Louis Emelius Chudleigh Worthington-Wilmer he was named as the other Man and fined £500 Pounds. Full details of the case were published in the Western Daily Press on the 21st May 1924 (See below).
Shortly after this in late 1924/early 1925 Theodore and the Lieutenant-Colonels ex-wife married in Marseilles, France, where they remained, living on Theodores pension until 1933. At this point in time the exchange rate plummeted from 123 Francs to the pound to just 75 and the couple now unable to live on their income cold up and returned to the UK.
The couple’s finances never really recovered after this and they continued to live beyond their means on borrowed money. After war was declared in 1939, Theodore was recalled for Service on the 2nd July 1940 and joined the R.A.F. Administration and Special Duties Branch as a Pilot Officer on Probation. On the 2nd July 1941 he was promoted to full Pilot Officer and on the 24th May 1942, he resigned his commission.
Throughout the whole of the period between 1933 and 1943, Theodore had continued to live well beyond his means but that all came to end when on the 31st May 1943, now over £513 in debt, he was forced to petition for bankruptcy.
On the 28th June 1943 Theodore was subject to public examination by the Deputy Official Receiver and forced to explain the events leading up to that point in time. Theodore blamed the commutation of his pension, poor investment in horses and the drop in the exchange rates and went on to admit that he had lived beyond his means.
On the 29th December 1943, Theodores bankruptcy was discharged and a dividend of one shilling, nine pence per pound was paid out. A total of just over £20 being paid back to his creditors.
Finally, after a long and distinguished career in the Army and a retirement plagued by bad decisions and growing debts, Theodore died in early 1950.