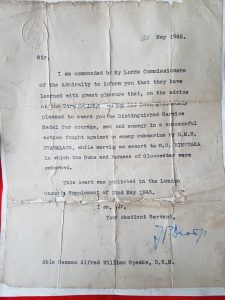 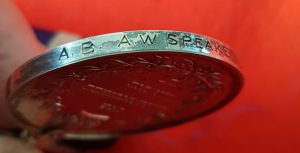 With original Admiralty Citation letter (25th May 1945), in poor condition stuck to card for preservation, which states:

Sir, I am commanded by My Lords Commissioners of the Admiralty to inform you that they have learned with great pleasure that, on the advice of the First Sea Lord, that The King had been graciously pleased to award you the Distinguished Service Medal for courage, zeal and energy in a successful action fought against an enemy submarine by H.M.S. NYASALAND, while serving as escort to S.S. RIMUTAKA in which the Duke and Duchess of Gloucester were embarked” This Award was published in the London Gazette Supplement of 22nd May 1945. I am Sir, Your Obedient Servant.

His Royal Highness Prince Henry, Duke of Gloucester and H.R.H. Princess Alice, Duchess of Gloucester, were travelling to Australia to take up the Governor Generalship of Australia on S.S. Rimutaka. They had left Liverpool, as part of Operation Aintree, on the 16th December and was travelling in the company of several capital ships which also included the cruiser HMS EURYALUS.

Able Seaman Alfred William Speake, from Harlesden, London, was the ASDIC (Sonar) operator on the destroyer HMS Nyasaland. At 11:15 pm he located the German submarine U-772 which was, when off the port bow, just about perfectly positioned to attack SS RIMUTAKA with its Royal passengers. The Nyasaland lead two attacks which destroyed the U-Boat. The weapon used was the Hedgehog depth charges and this was to be the last use of this weapon against a German U-Boat.

It is recorded that, as soon as Speake located the submarine, the ship’s captain Lt Cdr John Scott ordered the watertight doors closed and then called for Robert Frith the Captain of the Gun Crew to fire the Hedgehog anti-submarine devise. The depth charge cluster type of bombs were set to explode at different depths all around the Frigate, which was restricted to 2 knots while in action. It was fired successfully and the U-Boat was sunk with all hands.

An extract from the book – Churchill’s Greatest fear by Richard Docherty records the incident as follows; “There was one noteworthy encounter with a U-Boat south of Ireland on 17th December. The boat was U-772 and the loss of her target would have been a tremendous morale blow for he United Kingdom. The target was the SS Rimutaka, a P&O ship operated by a subsidiary, the New Zealand Shipping Company, which had sailed from Liverpool on the 16th. Onboard were HRH Prince Henry, Duke of Gloucester and HRH Princess Alice, bound for Australia where the Duke was to become Governor General. Rimutaka had a significant escort, including the cruiser HMS Euryalus, two destroyers and five frigates of B18. At 11.15p.m.on the 17th, HMS Nyasaland picked up a long-range ASDIC contact showing a submerged contact on Rimutaka’s port bow. Since the ships were about to alter course to port by 18 degrees, this would put the U-Boat in an excellent attacking position. Nyasaland promptly made the alarm signal. The ships turned the other way and Nyasaland remained to hunt. At 11.38 p.m. she made her first attack, followed 20 minutes later by a second. The explosions of her depth charges were followed by violent underwater detonations that lifted the frigate, while large quantities of diesel oil rising to the surface confirmed the kill.”

During the action HMS Nyasaland also sustained damage to its underside due to the force of the explosion and the lack of sea depth at the time of deployment. However, the Frigate then made for Glasgow where it was repaired.

The 6 Specific Gallantry awards for this action were announced in the London Gazette 22nd May 1945. The awards, listed below, were “FOR VIGILANCE AND SKILL IN OPERATIONS AGAINST AN ENEMY SUBMARINE WHILE SERVING IN HMS NYASALAND AS ESCORT TO THE S.S. RIMUTAKA, IN WHICH THE DUKE AND DUCHESS OF GLOUCESTER WERE EMBARKED” – Gun Captain Robert Frith and the ASDIC (Sonar) Operator William Speake were both awarded the D.S.M. for their parts in this action. The ship’s captain, Lt. Commander Scott, received a Bar to his D.S.C, Sub-Lt Frank A. Baldock, RNVR received the D.S.C. with seamen R. Ferguson & P. Booth being Mentioned in Despatches. 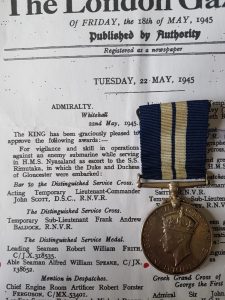 Both Speake & Frith later served on numerous Russian Convoys to Murmansk and Archangel and are thus entitled to the Arctic Star.

An important and notable Gallantry Medal which combines a U-Boat kill and the avoidance of a national disaster regarding the Royal Family. The medal is still in its original box of issue and is accompanied by the Admiralty letter and original newspaper clipping as described above.

Overseas buyers must contact us to agree shipping prior to purchase.