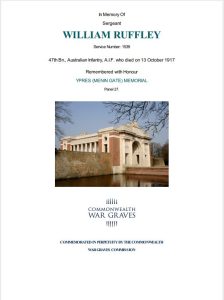 Born Sydney, New South Wales he was a 24 year old labourer when he enlisted at Toowoomba, Queensland. He was promoted to Armourer Sergeant whilst serving on the Gallipoli Peninsula. Following various illnesses and sicknesses he rejoined his unit 1st September 1917 and was Killed in Action 13th October 1917.

His papers record him as buried 1000 yards from Passchendaele. Sold with copy papers.