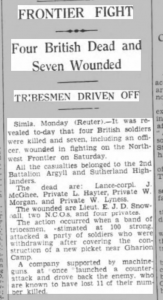 The medal roll for this India General Service Medal 1908 with North West Frontier Clasp confirms the award of this medal to Private Mcghee. A later annotation records that he was Killed in Action and that the medal was re-issued to his brother. This medal roll records 4 other Privates Killed in Action.

It is fair to deduce that his medal was in his possession and had been frequently worn when it was returned to his brother after his death.
Private McGhee was also awarded the India General Service Medal 1936 with North West Frontier 1936/37 clasp. On this roll, as with the 4 other private on the previous roll, he is marked as DECEASED.
He was stationed at Gharion Camp in the now Pakistan and the Bannu Brigade fighting in the Shan Plain against the Fakir of Ipi.
As reported in the Hartlepool Northern Daily Mail, 24th May 1937 the following article reads:
FRONTIER FIGHT – FOUR BRITISH DEAD and SEVEN WOUNDED – Tribesmen driven off.
Simla. Monday (Reuter) – It was revealed today that four British Soldiers were killed and seven, including an Officer, wounded in fighting on the North West Frontier on Saturday.
All the casualties belonged to the 2nd Battalion Argyll and Sutherland Highlanders.
The dead are: Lance-Corpl. J. MCGHEE, Private L Hayter, Private W. Morgan and Private W. Lyness.
The wounded are Lieut E. J. D. Snowball, two NCOs and four Privates.
The action occurred when a band of tribesmen, estimated at 100 strong, attacked a party of soldiers who were withdrawing after covering the construction of a new picket near Gharion Camp.
A company supported by machine-guns at once launched a counter attack and drove back the enemy, who are known to have lost 11 of their number.
This action and the loss of life was reported in newspapers around the world. 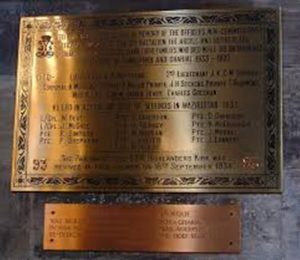 There exists a Memorial Plaque to the soldiers of the Argyll and Sutherland Highlanders killed or died of wounds in Waziristan 1937, which had been brought home from the Church in Gharial, Pakistan, in 1954 for safe keeping was accepted by and re-dedicated in the Church of the Holy Rude on the 22nd May 1955.
The Parish of the 93rd Highlanders Kirk was revived in this church on 18th September 1935
The Plaque reads as follows:
To the Glory of God and in memory of the Officers, Non-Commissioned
Officers and men of the 2nd Battalion The Argyll and Sutherland
Highlanders, (Princess Louise’s) and their families, who died while the Battalion was
Stationed in Rawalpindi and Gharial 1933 – 1937

Killed in Action or Died of Wounds in Waziristan : 1937

This medal has been worn and the naming is slightly rubbed, please see photographs. It represents a wonderful opportunity to re-unite this medal with his India General Service Medal 1936, which was awarded posthumously.