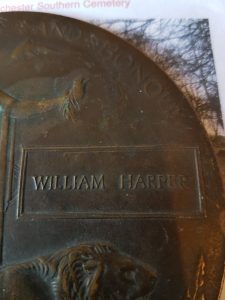 He is Remembered with Honour at Manchester Southern Cemetery. He landed in France 16th January 1915. After fighting at the 2nd Battle of Ypres where the Cheshires suffered heavy loss they left France. They landed in Salonika at Lozista where they lost 700 men, many due to malaria, as did William. The second plaque is to Albert Charles Harper.

Albert was serving on H.M.S. Alcantara, service number 723290, when he died on the 29th February 1916. He is Remembered with Honour at Plymouth Naval Memorial. Born in 1891 he was an Assistant Baker on the Alcantara. This was a Liner converted to an armed merchant cruiser.