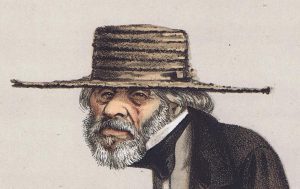 He was a Scottish philosopher, satirical writer, essayist, translator, historian, mathematician, and teacher. Considered one of the most important social commentators of his time, he presented many lectures during his lifetime with certain acclaim in the Victorian era. One of those conferences resulted in his famous work On Heroes, Hero-Worship, and The Heroic in History where he explains that the key role in history lies in the actions of the “Great Man”, claiming that “the history of the world is but the biography of great men”. A respected historian, his 1837 book The French Revolution: A History was the inspiration for Charles Dickens’ 1859 novel A Tale of Two Cities, and remains popular today. Carlyle’s 1836 Sartor Resartus is a notable philosophical novel. A great polemicist, Carlyle coined the term “the dismal science” for economics. He also wrote articles for the Edinburgh Encyclopædia, and his Occasional Discourse on the Negro Question (1849) remains controversial. Once a Christian, Carlyle lost his faith while attending the University of Edinburgh, later adopting a form of deism. In mathematics, he is known for the Carlyle circle, a method used in quadratic equations and for developing ruler-and-compass constructions of regular polygons.

Original Lithograph with the caption at the bottom of the print: The Diogenes of the Modern Corinthians without his Tub,