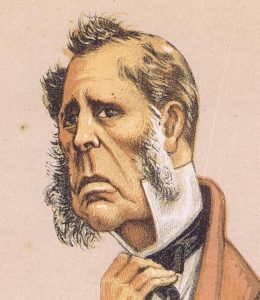 Original Lithograph with the caption at the bottom of the print: The Eccentric Liberal

Horsman was the son of William Horsman, a well-to-do gentleman of Stirling, Scotland, who died 22 March 1845, aged 86. His mother was Jane, third daughter of Sir John Dalrymple, 4th Baronet, and sister of the seventh and eighth Earls of Stair; she died in 1833. He entered Rugby School at Midsummer 1819, and afterwards proceeded to Trinity College, Cambridge, but did not take a degree. While at Cambridge he took part in three first-class cricket matches. He was admitted an advocate of the Scottish bar in 1832, but did not long continue to practise his profession.