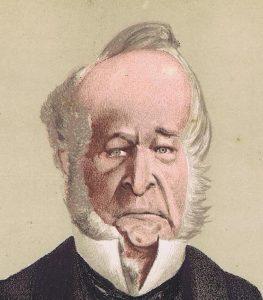 Original Lithograph with the caption at the bottom of the print: He Defended Hyde Park

Walpole was the second son of Thomas Walpole and Lady Margaret Perceval, youngest daughter of the 2nd Earl of Egmont and sister of Prime Minister Spencer Perceval. His grandfather was Thomas Walpole, son of the diplomat the 1st Baron Walpole, younger brother of Prime Minister the 1st Earl of Orford. Walpole was educated at Eton and Trinity College, Cambridge. He chose law as his profession, and was called to the Bar, Lincoln’s Inn, in 1831. He built up a successful practice and was made a Queen’s Counsel in 1846. Walpole then turned to politics, and in 1846 he was elected to Parliament for Midhurst as a Tory, a seat he would hold until 1856. He quickly gained a reputation in the House of Commons, and when the Tories came to power in early 1852 under Lord Derby, Walpole was appointed Home Secretary in the so-called “Who? Who? Ministry”. He was admitted to the Privy Council at the same time. However, the government fell in December 1852. In 1856 Walpole was elected to Parliament for Cambridge University. Two years later the Tories (or the Conservatives as they became known during the 1850s) returned to office under Lord Derby. Walpole was again appointed Home Secretary, but resigned in January 1859 after disagreements over electoral reforms. The government was dismissed in July the same year. The Conservatives remained out of office for seven years, but in 1866 they again came to power under Derby, who made Walpole Home Secretary for the third time. However, he was severely criticized for his handling of the movement for parliamentary reform, and resigned in May 1867. He nonetheless continued to serve in the cabinet as Minister without Portfolio until February 1868, when Benjamin Disraeli became Prime Minister. Walpole never held office again, but remained a Member of Parliament (MP) for Cambridge University until 1882. (wikipedia)