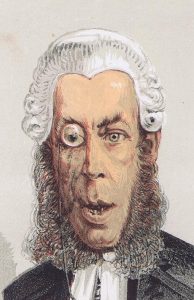 He was the eldest son of John Collier, a merchant of Plymouth, formerly a member of the Society of Friends and M.P. for that town from 1832 to 1842. Robert Collier was born in 1817, and was educated at the grammar school and other schools at Plymouth till the age of sixteen, when he was placed under the tuition of Mr. Kemp, subsequently rector of St. James’s, Piccadilly, London. He went to Trinity College, Cambridge, and while there wrote some clever parodies, and published a satirical poem called ‘Granta.’ Ill-health compelled him to abandon reading for honours and to quit the university, to which he only returned to take the ordinary B.A. degree in 1843. Already a politician, he made some speeches at Launceston in 1841 with a view to contesting the borough in the liberal interest, but did not go to the poll, and he was an active member of the Anti-Cornlaw League and addressed the meetings in Covent Garden Theatre

Original Lithograph of Sir Robert with the caption at the bottom of the print: Sir John Coleridge serves under him