Author of The Sling and the Stone 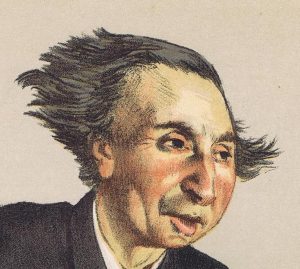 Original Lithograph with the caption at the bottom of the print: I Have Much To Be Thankful For

Voysey was a priest of the Church of England who was condemned by the Privy Council for heterodoxy and went on to found a theist church. He was the father of architect Charles Francis Annesley Voysey.

In 1863 Voysey was removed from the curacy of St Mark’s, Whitechapel after preaching a sermon denying the doctrine of eternal punishment. He was recommended for the curacy of St Mark’s, Victoria Docks. After a brief period as curate of North Woolwich he became curate and eventually Vicar of Healaugh near Tadcaster, in 1864, but soon ran into difficulties there.

From Healaugh he commenced writing his most famous work The Sling and the Stone. Originally published in monthly parts, it was eventually collected into ten volumes, the first of which was published in 1865. The work was immediately condemned by the conservative wing of the Anglican Church and William Thomson, Archbishop of York, began proceedings against him in 1869. He was summoned before the Chancery Court of York for heterodox teaching, where he defended his case for two years. He appealed to the Judicial Committee of the Privy Council which gave its judgement on 11 February 1871:

The Appellant is charged with having offended against the Laws Ecclesiastical by writing and publishing within the diocese of London certain sermons or essays, collected together in parts and volumes, the whole being designated by the title of “The Sling and the Stone,” in which he is alleged to have maintained and promulgated doctrines contrary and repugnant to or inconsistent with the Articles of Religion and Formularies of the Church of England.