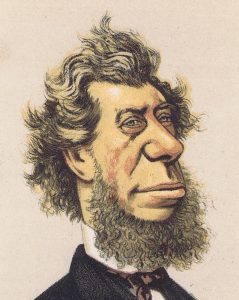 Original Lithograph of the American Secretary of State for Foreign Affairs with the caption at the bottom of the print: Consequential Damages

Hamilton Fish (August 3, 1808 – September 7, 1893) was an American politician who served as the 16th Governor of New York from 1849 to 1850, a United States Senator from New York from 1851 to 1857 and the 26th United States Secretary of State from 1869 to 1877. Fish is recognized as the “pillar” of the presidency of Ulysses S. Grant and considered one of the best U.S. Secretaries of State by scholars, known for his judiciousness and efforts towards reform and diplomatic moderation. Fish settled the controversial Alabama Claims with Great Britain through his development of the concept of international arbitration. Fish kept the United States out of war with Spain over Cuban independence by coolly handling the volatile Virginius Incident. In 1875, Fish initiated the process that would ultimately lead to Hawaiian statehood, by having negotiated a reciprocal trade treaty for the island nation’s sugar production. He also organized a peace conference and treaty in Washington D.C. between South American countries and Spain. Fish worked with James Milton Turner, America’s first African American consul, to settle the Liberian-Grebo war. President Grant said he trusted Fish the most for political advice