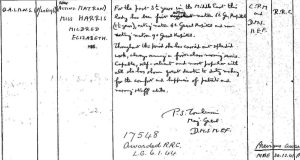 On the 30th December 1941 was awarded the M.B.E. the citation for which reads:- “Miss Mildred Elizabeth Harris (206196), Sister (acting Matron), Queen Alexandra’s Imperial Military Nursing Service: In recognition of distinguished services in the Middle East (including Egypt, East Africa, The Western Desert, The Sudan, Greece, Crete, Syria and Tobruk) during the period February, 1941, to July, 1941. “
The original Recommendation states:-
“During the Syrian Campaign 1941, the considerable and rapid expansion of No. 62 General Hospital necessitated a great deal of difficult and extra work by the Nursing sisters and orderlies, whose efficiency was due to the professional ability and devotion to duty shown by Miss Harris”.

On the 13th April 1943 Mildred was appointed Acting Matron whilst still serving in the Middle East and on the 6th January 1944 she was awarded the Royal Red Cross 1st Class the citation for which reads:-
“Miss Mildred Elizabeth Harris (206196), Sister (acting Matron), Queen Alexandra’s Imperial Military Nursing Service (Portishead, Somerset): “In recognition of gallant and distinguished services in the Middle East”.
The original Recommendation states:-
“For the past 3 1⁄2 years in the Middle East this lady has been first Acting Matron 62 General Hospital (1 1⁄2 years), Acting Matron 42 General Hospital and now Acting Matron 90 General Hospital. Throughout this period she has carried out splendid work, always running a first-class nursing service. Capable, self-reliant and most popular with all she has shown great devotion to duty making for the comfort and happiness of patients and nursing staff alike”.
With the war over, Mildred continued in the service and on the 1st February 1949 she was appointed Senior Commander (Temporary Chief Commander (Temp. Lieutenant-Colonel)) in the now renamed Queen Alexandra’s Royal Army Nursing Service.
On the 1st April 1950 Mildred was confirmed in the rank of Lieutenant-Colonel and on the 7th January 1952 she retired from the service.