Original Papers Lost at the Battle of Maiwand 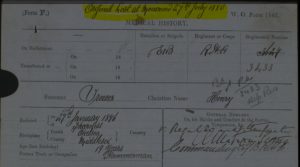 Royal Horse Artillery, a possible survivor of the Battle of Maiwand.

It is of note that his papers have been annotated “Original Lost at Maiwand 27th July 1880”.

At Maiwand, on that disastrous day of 27 July 1880, ‘E’ Battery, ‘B’ Brigade, Royal Horse Artillery played a most conspicuous roll. It suffered as a consequence 2 officers and 19 other ranks killed and 2 officers and 14 other ranks wounded, gaining in the process two Victoria Crosses and eight Distinguished Conduct Medals. Retiring to Kandahar, E/B., R.H.A. served during the siege of Kandahar, with three guns mounted on the Herat facing wall and one on the Idgah Gate. During the battle of Kandahar, 1 September 1880, for which Gunner Trower was awarded the clasp, the battery was attached to the Cavalry Brigade.

Henry Trower was born in Chelsea and he was a 19 year old hammerman when he enlisted 27th January 1876. He served in excess of 6 years in India during which time he was promoted to Bombardier during hos 12 years army career.

Medal roll confirms the meal and clasp to 3427 Pte H Trower. He was renumbered 3433.