A Freemason, he became the first District Grand Master for Turkey under the United Grand Lodge of England in 1862 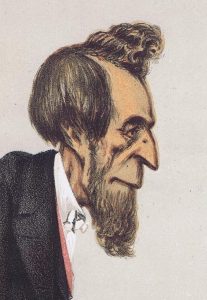 Bulwer was the second son of General William Bulwer and his wife, Elizabeth Barbara, daughter of Richard Warburton-Lytton. He was an elder brother of Edward Bulwer-Lytton, 1st Baron Lytton, uncle of Robert Bulwer-Lytton, 1st Earl of Lytton, Viceroy of India, 1876–1880, and the uncle of Sir Henry Ernest Gascoyne Bulwer. He was educated at Harrow School, Trinity College and then the recently founded Downing College, both at Cambridge. After graduating and touring the continent, he joined the Life Guards in 1824 and exchanged to the 58th Regiment of Foot two years later.

Original Lithograph of  Sir Henry L.E. Bulwer with the caption at the bottom of the print: A Superannuated Diplomat