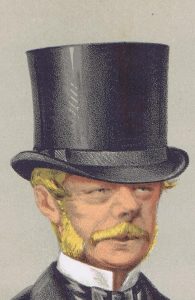 Noel was elected Member of Parliament for Rutland in 1847. He served under Lord Derby and then Benjamin Disraeli as a Lord of the Treasury from 1866 until 1868 and then briefly under Disraeli as Parliamentary Secretary to the Treasury between November 1868 and the fall of the Conservative government in December of the same year. After the Conservatives returned to power in 1874 he was sworn of the Privy Council.From 1876 until 1880 Noel served under Disraeli (then known as the Earl of Beaconsfield) as First Commissioner of Works. In 1883 he resigned from his seat in parliament through appointment as Steward of the Chiltern Hundreds. Apart from his political career Noel was also a Captain in the 11th Hussars and a Deputy Lieutenant and Justice of the Peace for Rutland

Original Lithograph with the caption at the bottom of the print: A Nice Little Fellow,