President of the London Homeopathic Hospital 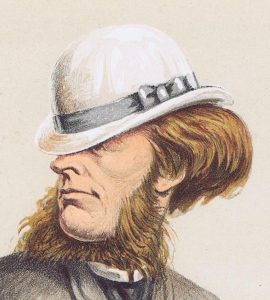 He was the eldest son and heir of Francis Wemyss-Charteris, 9th Earl of Wemyss and succeeded his father in 1883. Prior to then he was known as Lord Elcho. As Lord Elcho he was commanding officer of the London Scottish regiment for 17 years from its formation in 1859. Charteris was a member of the Canterbury Association from 27 March 1848, and belonged to the management committee. He developed an interest in the alternative medical practice of Homeopathy, even becoming President of the London Homeopathic Hospital until his death. The strength of his belief is evidenced by his writing in March 1914: “I wish all success to Homoeopathy, to which I attach my physical well-being in great measure. When I was 90 I was asked to what I attributed my well-being at that late period of life. My answer was, ‘To parentage and moderation’. I should have added ‘AND HOMOEOPATHY,’ with which I have been treated since I was 20.

Original Lithograph of Lord Elcho with the caption at the bottom of the print: His Course Has Been If Not A Wise, Yet A Consistent One, And Dictated By Conscience Only.