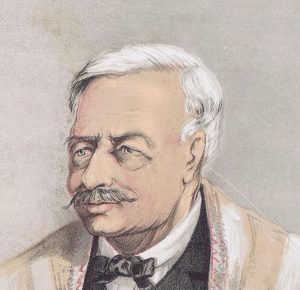 He was a French diplomat and later developer of the Suez Canal, which in 1869 joined the Mediterranean and Red Seas, substantially reducing sailing distances and times between Europe and East Asia. He attempted to repeat this success with an effort to build a Panama Canal at sea level during the 1880s, but the project was devastated by epidemics of malaria and yellow fever in the area, as well as beset by financial problems, and the planned de Lesseps Panama Canal was never completed. Eventually, the project was bought out by the United States, which solved the medical problems and changed the design to a non-sea level canal with locks. It was completed in 1914

Original Lithograph of Le Vicomte with the caption at the bottom of the print: He Suppressed An Isthmus