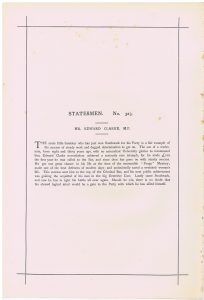 Original Vanity Fair Print Lithograph of the Barrister Mr. Edward Clarke M.P. with the caption at the bottom of the print: Southwark

1877 The Trial of the Detectives Clarke secured the acquittal of Chief Inspector Clarke, the acting head of the Detective Department at Scotland Yard, on charges of corruption. Three other, more junior, police officers were convicted, and the detective division of the Metropolitan Police was completely reorganised as a result.

1877 The Penge Murder Harriet Staunton, a mentally-disabled woman of 38, had died at Penge in Kent, apparently of starvation. Her husband, Lewis Staunton, together with his brother, his brother’s wife and his mistress (who was his brother’s wife’s sister) were charged with murdering her by deliberate neglect; although they were charged only with one murder, it was generally believed that they were also responsible for the death of Harriet’s baby son, also by starvation. Clarke defended Patrick Staunton, the brother; although all four were convicted and sentenced to death, sufficient doubt about the strict legal position had been raised at the trial that the sentences of the three Stauntons were commuted to penal servitude for life, and the fourth defendant, Alice Rhodes, was given a free pardon.

1886 The Pimlico Mystery, Clarke defended Adelaide Bartlett on a charge of having murdered her husband by poisoning with chloroform; she was acquitted.

1891 The Royal Baccarat Case or Tranby Croft Scandal. Clarke represented Sir William Gordon-Cumming, who sued five people for slander after being accused of cheating at cards. The case was notorious because the Prince of Wales, later King Edward VII, had been banker during the game in which Gordon-Cumming was said to have cheated; the prince was called as a witness, and vigorously cross-examined by Clarke. Nevertheless, Gordon-Cumming lost the case.

1895; R v Oscar Wilde, 1895. Clarke represented Oscar Wilde in his ill-advised prosecution of the Marquess of Queensberry for criminal libel. Queensberry being found not guilty, Clarke considered himself partly to blame for the tactics pursued during the trial, and when Wilde was subsequently arrested and prosecuted for homosexual practices, Clarke considered himself duty-bound to undertake the defence, which he did while refusing to accept a fee. Clarke was initially widely condemned for doing so, even within the legal profession, outraged as much by a barrister appearing without a fee as by their revulsion for Wilde, although opinions were later reversed. In the first trial, when Clarke’s conduct of the defence was described by the prosecuting counsel as “courageous and brilliant”, the jury disagreed; but Clarke was unable to persuade the jury in the re-trial against a guilty verdict.

1896 R. v Leander Starr Jameson, Willoughby and others, 1896.[4] Clarke defended Leander Starr Jameson for his organisation of the Jameson Raid. Jameson was convicted and sentenced to fifteen months in jail, but was soon pardoned, and was generally treated as a national hero.

Overseas buyers please contact us to agree shipping. Note that these lithograph prints are all in excess of 100 years old. There may be minor imperfections commensurate with age. Please do not hesitate to ask questions about shipping or condition.