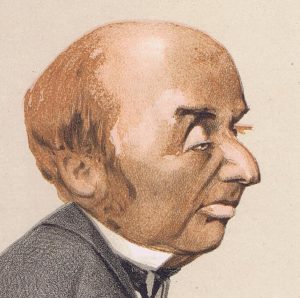 Original Lithograph with the caption at the bottom of the print: An Irish Baronet

Colman Michael O’Loghlen, 2nd Baronet (pronounced and sometimes spelt O’Lochlen) (20 September 1819 – 22 July 1877) was an Irish baronet and politician. O’Loghlen was born in County Clare, Ireland, eldest son of the distinguished Irish judge Sir Michael O’Loghlen, 1st Baronet and his wife Bidelia Kelly. He was educated by the Jesuits at Clongowes Wood College, Co Kildare. He attended from 1831-1833. He succeeded to his father’s baronetcy in 1842 on the death of his father, and in 1863 he was elected to the British House of Commons for County Clare. He held the seat until his death in 1877, aged 57. He had no son and the title passed to his brother Bryan, Premier of Victoria. O’Loghlen held the office of Judge Advocate General, from 1868 until 1870. At the time this was a political office. He was elected a Member of the Royal Irish Academy in 1856