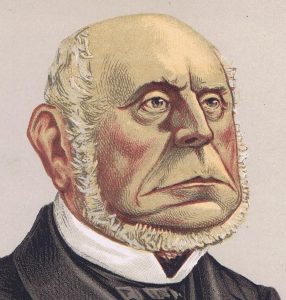 Original Lithograph with the caption at the bottom of the print: An Arbitrator

Charles Francis Adams Sr. (August 18, 1807 – November 21, 1886) was an American historical editor, writer, politician, and diplomat. He was a son of President John Quincy Adams and grandson of President John Adams, of whom he wrote a major biography.Adams served two terms in the Massachusetts State Senate before running unsuccessfully as vice-presidential candidate for the Free Soil Party in the election of 1848 on a ticket with former President Martin Van Buren. During the Civil War Adams served as the United States Minister to the United Kingdom under Abraham Lincoln, where he played a key role in keeping Britain neutral while southern agents were trying to achieve official recognition of the Confederacy. That meant conducting dialogue with both sides and monitoring the British connection in the supply of commerce raiders. He became an overseer of Harvard University, and built Adams National Historical Park, a library in honor of his father in Quincy, Massachusetts.