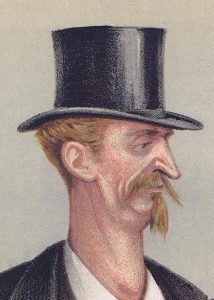 Original Lithograph with the caption at the bottom of the print: He Well Deserves His Popularity

He was the first Chief Officer of the Metropolitan Fire Brigade (now renamed the London Fire Brigade), and the Superintendent of its predecessor, the London Fire Engine Establishment, from 1861 to 1891.[2] He introduced modern firefighting methods to the Brigade, and increased the number of stations. Shaw was born in Ballymore, County Cork, Ireland and was educated first at a school in Queenstown and then at Trinity College, Dublin. Shaw considered joining the Church but decided on a career in the Army and gained a commission in the North Cork Rifles, a militia regiment of the British Army (later the 9th Battalion, King’s Royal Rifle Corps) from 1854 to 1860, reaching the rank of captain. He resigned from the Army on being appointed Chief Constable of Belfast Borough Police in June 1860, in charge of both the police and the fire brigade.[4] In September 1861, following the death of the then head, James Braidwood, in the line of duty while fighting a massive fire in Tooley Street, Shaw was engaged as head of the London Fire Engine Establishment