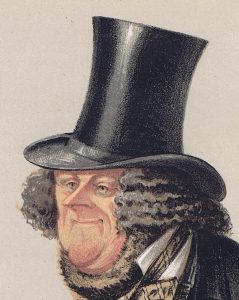 The 1st Earl of Dudley (27 March 1817 – 7 May 1885), known as The Lord Ward from 1835 to 1860, was a British landowner and benefactor. Ward was born on 27 March 1817 at Edwardstone, Boxford, Suffolk, England, the son of William Ward, 10th Baron Ward, who had succeeded in the barony of Ward on the death of his second cousin, Foreign Secretary John Ward, 1st Earl of Dudley, in 1833 (the earldom becoming extinct). His mother was Amelia, daughter of William Cooch Pillans. He was educated at Eton and Christ Church, Oxford and Trinity College, Oxford. He played first-class cricket for Oxford University Cricket Club between 1838 and 1842. His inheritance included Himley Hall and the ruins of Dudley Castle. In 1837 his trustees puchased the Witley Court estate in Worcestershire from Thomas Foley, 4th Baron Foley.

Original Lithograph with the caption at the bottom of the print: Property