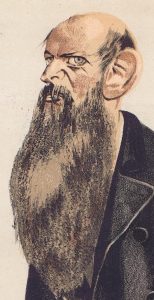 Original Lithograph with the caption at the bottom of the print: Permissive Prohibition

Sir Wilfrid Lawson, 2nd Baronet (4 September 1829 – 1 July 1906) was an English temperance campaigner and radical, anti-imperialist Liberal Party politician who sat in the House of Commons variously between 1859 and 1906. He was recognised as the leading humourist in the House of Commons. Lawson was Member for Carlisle, 1859–65, 1868–85; Cockermouth, 1886–1900; Camborne, 1903–1906; and Cockermouth 1906. He was the son of Sir Wilfrid Lawson, 1st Baronet, of Brayton, who changed his name from Wybergh, and Caroline Graham, daughter of Sir James Graham. He was privately educated at home. He was a founder member of both the National Liberal Club and the Reform League, a prominent member of the Peace Society, and the Society for the Suppression of the Opium Trade. He was a director of the Maryport and Carlisle Railway and a Justice of the Peace for Cumberland. He was always an enthusiast in the cause of temperance and in 1879 he became president of the United Kingdom Alliance. He was, like his younger brother William, a forward thinking co-operator and agriculturalist