Wessex Field Ambulance Gallantry Family Medals. Interesting family groups of First World War medals to 3 brothers from Tiverton, Devon which includes a Gallantry Medal group to the Royal Army Medical Corps, 2 low number RAMC groups and the medals of a Sussex Regiment Casualty of the Battle of Loos. There are 3 groups of medals, each one has its own interesting aspect. 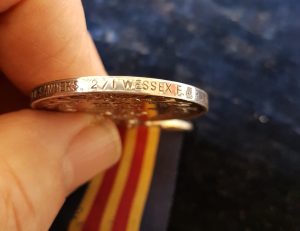 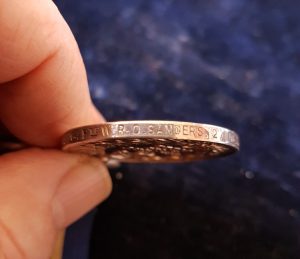 British War Medal & Victory Medal named to – 2212 PTE. W. R. SANDERS. R.A.M.C. His ribbon bar is with this group. William Sanders was wounded three times. In September 1917 he suffered terrible mustard gas burns (2nd degree mustard oil burns). Terrible burns to his buttocks, thighs, scrotum and penis. He suffered perforated eardrums by shellfire November 6th 1918 as well as Gunshot wounds to his left leg, November 1918. There is also a note of his suffering from shrapnel wounds as well. He spent 3 periods in France – 1 yr 168 days, 79 days and 226 days between March 15 and Nov 18. At 14 he was a Legal Clerk in Tiverton living at the family home. He died in Newton Abbot 1987. The second medal group is a 1914 “Mons” Star Trio named to 2020 PTE. H. SANDERS. R.A.M.C. Henry Sanders served with 24 Field Ambulance, 1st / 1st Wessex, and entered France 5th November 1914. 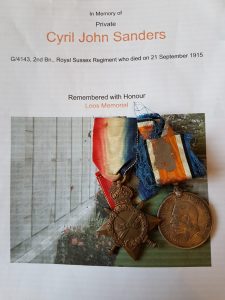 The Sanders on the Star has a U and reads Saunders, this is not an uncommon error.

The third brother’s medals are the 1914 / 15 Star and British War Medal named to G-4143. PTE. C. J. SANDERS. R. SUSS. R.  Cyril John Sanders served with 2nd Battalion, Royal Sussex Regiment. His medal index card confirms that he entered France 18th May 1915 and was Killed in Action 21st September 1915. He is Remembered with Honour at Loos Memorial. When he joined up for the war he was living with relatives in Sussex. The family address was 33 Fore Street, Tiverton, Devon.