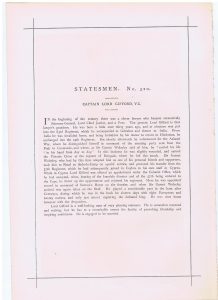 In 1874, at the age of 23, Gifford was a lieutenant in the 2nd Battalion, 24th Foot (later the South Wales Borderers), British Army during the Third Anglo-Ashanti War, when the events took place which resulted in the award of his Victoria Cross with the citation:

“For his gallant conduct during the operations, and especially at the taking of Becquah. The Officer commanding the Expeditionary Force reports that Lord Gifford was in charge of the Scouts after the Army crossed the Prah,’ and that it is no exaggeration to say that since the Adansi Hills were passed, he daily carried his life in his hand in the performance of his most dangerous duties. He hung upon the rear of the enemy, discovering their position, and ferreting out their intentions. With no other white man with him, he captured numerous prisoners; but Sir Garnet Wolseley brings Him forward for this mark of Royal favour most especially for his conduct at the taking of Becquah, into which place he penetrated with his scouts before the troops carried it, when his gallantry and courage were most conspicuous”

Free postage to mainland UK. Overseas buyers please contact us to agree shipping. Note that these lithograph prints are all in excess of 100 years old. There may be minor imperfections commensurate with age. Please do not hesitate to ask questions about shipping or condition.