The first  England player to Carry His Bat. 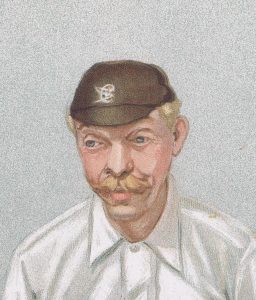 Original Lithograph with the caption at the bottom of the print: Bobby, Published: 05-Jun-1902 Signed by: SPY, Leslie Ward .

Robert Abel (30 November 1857 – 10 December 1936), nicknamed “The Guv’nor”, was a Surrey and England opening batsman who was one of the most prolific run-getters in the early years of the County Championship. He was the first England player to “carry his bat” – opening the batting and remaining not out at the end of an innings – through a Test innings, and the first player to score 2000 runs in consecutive seasons – which he did each season from 1895 to 1902. In 1899 for Surrey against Somerset at The Oval, Abel carried his bat through an innings of 811, the highest total for which this feat has been achieved.[1] His 357* in that innings remains a Surrey record, and was the highest score made at The Oval until Len Hutton scored 364 in 1938. Abel also played a record number of first-class matches in a season – 41 in 1902.

Abel was physically small, 5 feet 4 inches (1.63 m) tall and slimly built. He suffered in the later part of his career from serious vision problems that could have handicapped him against fast bowling; however, his ability to produce eccentric, unorthodox cross-batted strokes – particularly the pull around his legs – complemented with determination and stamina, brought Abel success even on difficult pitches, and made him popular with the public. (wikipedia)