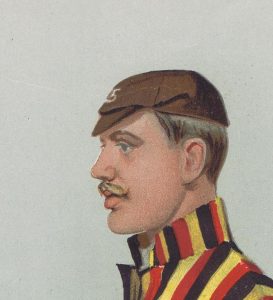 As Lord Dalmeny he was a prominent cricketer and he played two first-class matches for Middlesex in 1902. He served as captain of Surrey County Cricket Club (1905–1907). He played in 102 first-class matches in all, scoring 3551 runs at an average of 22.47, including 2 centuries with a highest score of 138. He was a hitter of notable power[4] and though never consistent he could on occasions “knock the best bowling all over the field”, as when he hit 58 against Hallam on a difficult wicket at The Oval in 1905.

Lord Dalmeny was commissioned into the Grenadier Guards as a Second lieutenant 12 February 1902. During the First World War, he served in France from 1914–17 as Camp Commandant and ADC to General Allenby and subsequently in Palestine as Allenby’s Military Secretary.