He invented the googly 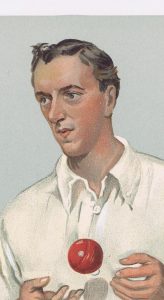 Bernard James Tindal Bosanquet (13 October 1877 – 12 October 1936) was an English cricketer best known for inventing the googly, a delivery designed to deceive the batsman. When bowled, it appears to be a leg break, but after pitching the ball turns in the opposite direction to that which is expected, behaving as an off break instead. Bosanquet, who played first-class cricket for Middlesex between 1898 and 1919, appeared in seven Test matches for England as an all-rounder. He was chosen as a Wisden Cricketer of the Year in 1905.

Wisden Cricketer of the Year

Bosanquet played cricket for Eton College from 1891 to 1896, before gaining his Blue at Oriel College, Oxford. He was a moderately successful batsman who bowled at fast-medium pace for Oxford University between 1898 and 1900. As a student, he made several appearances for Middlesex and achieved a regular place in the county side as an amateur. While playing a tabletop game, Bosanquet devised a new technique for delivering a ball, later named the “googly”, which he practised during his time at Oxford. He first used it in cricket matches around 1900, abandoning his faster style of bowling, but it was not until 1903, when he had a successful season with the ball, that his new delivery began to attract attention. Having gone on several minor overseas tours, Bosanquet was selected in 1903–04 for the fully representative Marylebone Cricket Club (MCC) tour of Australia.[note 1] During that tour, he made his Test debut for England and although he largely failed as a batsman, he performed well as a bowler and troubled all the opposing batsmen with his googly.

More success followed; in the 1904 season, he took more than 100 wickets and his bowling career peaked when took eight wickets for 107 runs in the first Test against Australia in 1905 to bowl England to victory. However, he never mastered control of good length bowling and remained an erratic performer. After 1905, Bosanquet’s bowling went into decline; he practically gave it up and made fewer first-class appearances owing to his business interests. After taking part in the First World War in the Royal Flying Corps, he married and had a son, Reginald Bosanquet, who later became a television newsreader. He died in 1936, aged 58. (wikipedia)