1 of 20 Loyal North Lancs Mounted Infantry out of an overall total of 174 with this combination issued for the infamous Bread Run from Kimberley to Paarderburg. 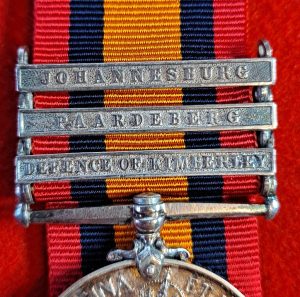 Defence of Kimberley  / Paarderberg clasp combination – Following a faster than anticipated chase of Cronje the supply lines were overstretched and a message was sent to Kimberley for a delivery of bread. De Beers duly baked the required bread and an escort was raised to provide support for the delivery. 174 troops were assigned escort duty of which 20 were from the Loyal North Lancs Mounted Infantry, of which Holmes was one. The bread was delivered without incident with the party staying 1 night at Paarderberg – thus them being entitled them to the clasp.

Prior to the unit posting to the Cape Holmes was stationed in Ceylon where he served for just over 3 years. He was then posted to South Africa 11th February 1899. Great War service saw him serving with the Kimberley Regiment, 2nd Battalion. He saw service in German South West Africa (Namibia) before transferring to the South African Volunteer Regiment.

George Holmes was born 11th November 1875 to James and Elizabeth Holmes of Boxwood Street, Blackburn, Lancashire. He was a Flagger and Slater when he attested in 1894. Having retired from De Beers he lived in Sawmills, Southern Rhodesia. He died 19th April 1947. He had served De Beers for circa 32 years, excepting the years of military service during the Great War.

With folder of research and copy papers.

Overseas buyers to agree shipping method and costs before buying. Payment by Bank Transfer or Card. IBAN & SWIFT numbers on request for international money transfers. PAYPAL is not available but can be arranged though this will incur an additional fee of 5% of the total.