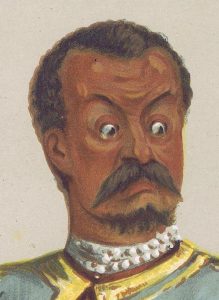 Original Lithograph of Signor Tommaso Salvini with the caption at the bottom of the print: Othello

Salvini was born in Milan. His father and mother were both actors. His father was involved in the Bon and Berlaffa Company and the actor who was to play Pasquino fell ill. Instead of closing the theatre for the night his father asked the young Salvini to play the role. In his autobiography, he writes that “when I perceived that some of Pasquino’s lines were amusing the audience, I took courage, and, like a little bird making his first flight, I arrived at the goal, and was eager to try again … It is certain that from that time I began to feel that I was somebody.” In 1847 Salvini joined the company of Adelaide Ristori, who was then at the beginning of her career. It was with her as Elettra that he won his first success in tragedy, playing the title role in Alfieri’s Oreste at the Teatro Valle in Rome. Salvini fought in the First Italian War of Independence in 1849, but otherwise devoted his life to acting. In 1853, however, he took a year off because “he rarely felt adequately prepared for a role”. During this time, he prepared roles in great depth. Salvini’s most famous role was Othello, which he played for the first time at Vicenza in June 1856. His other important roles included Conrad in Paolo Giacometti’s La Morte civile, Egisto in Alfieri’s Merope, Saul in Alfieri’s Saul, Paolo in Silvio Pellico’s Francesca da Rimini, Oedipus in Niccolini’s play of that name, William Shakespeare‘s Macbeth and King Lear. The core of his acting method came from his studies. While visiting Gibraltar, for example, he spent time studying the Moors and found one particular man whom he based his Othello on. Instead of relying on a mustache, which was the traditional way of depicting a Moor, he tried to copy “gestures, movements, and carriage” to depict the character. Salvini acted frequently in England, and made five visits to the United States, his first in 1873 and his last in 1889. In 1886, he played Othello to the lago of Edwin Booth. He always delivered his lines in Italian while the rest of the company spoke English (except during his first tour, when he had an Italian company). According to the New York World (27 October 1885), “had he spoke Greek or Chocaw, it would have been much the same. There was that about him that was universal, and had he remained mute and contented himself with acting alone his audience could scarcely have failed to understand, so faithful was his portraiture of human instincts and their action”

Salvini’s acting in Othello greatly inspired the young Russian actor Constantin Stanislavski, who saw Salvini perform in Moscow in 1882 and who would, himself, go on to become one of the most important theatre practitioners in the history of theatre. Stanislavski wrote that Salvini was the “finest representative” of his own approach to acting