Domestic Prelate to the Pope 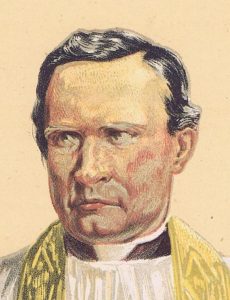 Original Lithograph of the Monsignor with the caption at the bottom of the print: The Apostle To The Genteel,

Born in either Waterford or Ardmore in Ireland, by 1881 he gives his place of birth as Ramsgate in Kent; this was either done for social reasons or represents a genuine error. His father John Capel was a Chief Boatman with the Coast Guard. In 1854 he helped to establish St Mary’s Training College in Hammersmith and became its vice-principal where he remained until 1858 when ill health forced him to resign and go to France to recover. While in France he established the English Catholic Mission at Pau.

The Apostle to the Genteel
On his return to England he received into the Catholic Church the Marquis of Bute and many high-profile Anglicans. This led to Capel being satirised by Disraeli in his novel Lothair where he appears as Mgr Catesby. The identification of Thomas Capel as Catesby was fairly widespread as a letter of John Cashel Hoey to Archbishop Manning of 2 May 1870, the day of the book’s publication, shows. In 1873, possibly as a result of this and other conversions, he was created Domestic Prelate to the Pope.

Catholic University College
In 1874 Archbishop Manning established a Catholic University College in Kensington and Mgr Capel was appointed Rector. The College was established to provide higher education to Catholics who were forbidden by Papal Decree to attend Oxford or Cambridge. The College faced problems from the outset, the principle one being that of finance; the theory was that the rich Catholic families who would benefit from the College would help to fund it during the first few years. In practice however these families preferred to send their sons to Oxford or Cambridge and seek a dispensation for doing so. This situation was worsened by Mgr Capel’s financial mismanagement which left the College in debt and Mgr Capel bankrupt. wikipedia