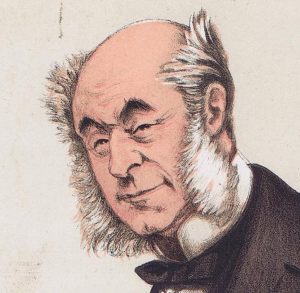 Surgeon to the Queen

William Fergusson son of James Fergusson of Lochmaben, Dumfriesshire, was born at Prestonpans, East Lothian on 20 March 1808, and was educated first at Lochmaben and afterwards at the high school and University of Edinburgh. At the age of fifteen he was placed by his own desire in a lawyer’s office, but the work proved uncongenial, and at seventeen he exchanged law for medicine, in accordance with his father’s original wishes. He became an assiduous pupil of Dr. Robert Knox the anatomist, who was much pleased with a piece of mechanism which Fergusson constructed, and appointed him at the age of twenty demonstrator to his class of four hundred pupils.

In 1828 Fergusson became a licentiate, and in 1829 a fellow of the Edinburgh College of Surgeons. He continued zealous in anatomy, often spending from twelve to sixteen hours a day in the dissecting-room. Two of his preparations, admirably dissected, are still preserved in the museum of the Edinburgh College of Surgeons. Soon after qualifying Fergusson began to deliver a portion of the lectures on general anatomy, in association with Knox, and to demonstrate surgical anatomy. In 1831 he was elected surgeon to the Edinburgh Royal Dispensary, and in that year tied the subclavian artery, which had then been done in Scotland only twice. On 10 October 1833 he married Helen, daughter and heiress of William Ranken of Spittlehaugh, Peeblesshire. This marriage placed him in easy circumstances, but he did not relax his efforts after success in operative surgery, and by 1836, when he was elected surgeon to the Royal Infirmary of Edinburgh and fellow of the Royal Society of Edinburgh, he shared with James Syme the best surgical practice in Scotland.

In 1840 Fergusson accepted the professorship of surgery at King’s College London, with the surgeoncy to King’s College Hospital, and established himself at Dover Street, Piccadilly, whence he removed in 1847 to 16 George Street, now St George’s Street, Hanover Square. He became M.R.C.S. Engl. in 1840, and fellow in 1844. His practice grew rapidly, and the fame of his operative skill brought many students and visitors to King’s College Hospital. In 1849 he was appointed surgeon in ordinary to the prince consort, and in 1855 surgeon extraordinary, and in 1867 sergeant-surgeon to the queen.

Original Lithograph of Sir William Fergusson with the caption at the bottom of the print: There Is No Man Of Greater Weight in his Profession