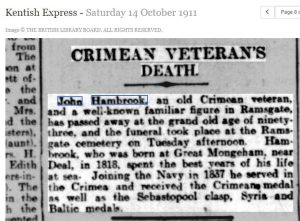 CRIMEAN VETERAN’S DEATH. John Hambrook, an old Crimean veteran and a well-known familiar figure in Ramsgate has passed away at the grand old age of ninety-three and the funeral took place at the Ramsgate cemetery on Tuesday afternoon. Hambrook, who was born at Great Mongeham near Deal, in 1818. spent the best years of his life at sea. Joining the Navy in 1817 served in the Crimes and received the Crimean medal as well as the Sebastopol clasp, Syria and Baltic medals.