MALAYA 1957 INDEPENDENCE DAY LOWERING OF THE ROYAL STANDARD FOR THE LAST TIME. 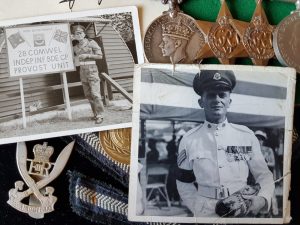 Immediate award to a 21 year old, who a couple of years previously had left school to become an Air Raid Warden’s Messenger Boy. He went on to have a career in the Royal Military Police. 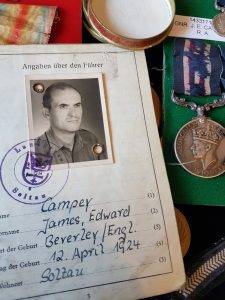 On 19/20 Apr Gnr Campey was the wireless operator of a FOO’s party (the handwritten account writes Forward Observation Officer’s) in sp of 6 HLI in an attack on the weeds north of Soltau. During the first day and on the following morning, the Coy was subjected to fire from enemy snipers and heavy bombardment by mortars and guns, which caused considerable casualties, including the driver of Gnr Campey’s armed OP. Gnr Campey manned his wireless set almost continuously during this time, including all through the night, to ensure that comms were maintained with his Regt. He assisted in dressing the wounds of the driver and getting him to some shelter, and on the move forward with another Coy, took his place as driver, manning the set whenever halted. Shortly after this whilst moving to occupy an OP, the carrier was bogged and, without hesitation, Gnr CAMPEY doubled back alone to the previous position, regardless of intense Spandau fire, which was pinning the infantry down, and brought forward another carrier. Throughout the whole operation Gnr CAMPEY showed a complete disregard of danger, and by his initiative and outstanding devotion to duty enabled arty sp (artillery support) to be given to the infantry on all occasions.

The citation is signed off by Montgomery, on the reverse.

There is also his loose U.N. Korea Medal, he did not qualify for the British Medal. There is also a miniature set of the medal group.

List of ephemera and other items accompanying this medal group.

This excellent group is accompanied by his father’s Great War Medal Trio. The 1914 / 15 Star trio is named to D/1101 Private James Harold Campey, 6th Dragoon Guards. Harold, as he was known, was serving in the 7th Dragoon Guards, stationed in India, on the 1911 Census. Later to become a Policeman in Beverley, Yorkshire. There is also an Inniskilling’s cap badge with the lot.