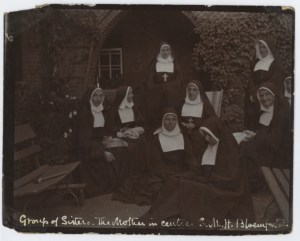 Significant Anglo-Boer War Queen’s South Africa Medal to a Sister of the St. Michael’s and All Angels Home, Bloemfontein.

Sister Frances Louise was Mentioned in Despatches in Lord Roberts’ Despatch of 1901. His despatch begins – “I find it difficult within the limits of a short paragraph to give expression to the deep feeling of gratitude with which the Nursing Sisterhood has inspired all ranks serving in South Africa.” 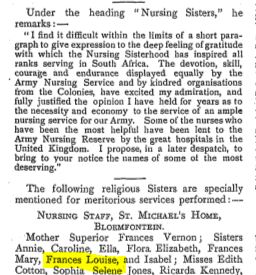 The depth of appreciation of the work and hardships endured by Religious Order Sisters who nursed the sick and wounded during the Anglo Boer War can also be understood from the article entitled GENERAL KELLY-KENNY AND THE NUNS as published in The Tablet Saturday May 9th 1903. This article emphasis the devotion of the Nursing Sisters during the Campaign.

Of specific and important note, it is recorded that Sisters Caroline and Frances Louisa were given safe conduct through the lines to Jakobsdal to treat the sick and wounded. They were asked to not wear their habits for hygiene reasons. The Sisters merely replied that they could not do this and that were ready to help in any way but if it was insisted that they change clothing they would return home. As has been written, they considered themselves religious first rather than as nurses.  ( Source –  NUNS, GUNS AND NURSING: AN ANGLICAN SISTERHOOD AND IMPERIAL WARS IN SOUTH AFRICA 1879 – 1902 by Mandy Goedhals ). 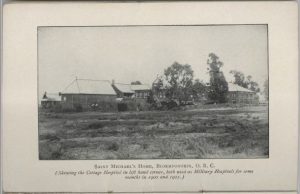 It is further noted that Sister Caroline and Sister Frances Louisa nursed the wounded from the Battle of Magersfontein prior to being replaced by a nursing unit from Germany.

Sister Frances Louise embarked on a visit home and fundraising tour of talks in the UK in 1902. A 32 page pamphlet was produced to accompany the tour called – Gleanings in Sunny Africa 1873-1901 in which Frances Louisa features. The importance of Sister Frances Louise and the responsibilities carried by her as mentioned in the pamphlet underline her status within the Church at St Michael’s and All Angels. 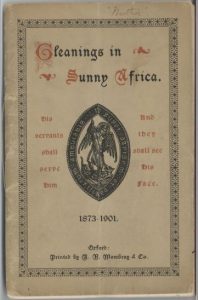 This pamphlet gives a detailed history of the founding of St Michael’s, Bloemfontein and the wide ranging services and ministrations of the Home. It also highlights the privations met by the Nuns at St Michael’s and All Angels.

St Michael’s and All Angels would have been  greatly impacted by the outbreak  of typhoid following the destruction of the town’s water supply by the Boers after the action at Sanna’s Post at the end of March 1900. The consequence were the deaths of in excess of 2000 men of typhoid. Arthur Conan Doyle, who had been expecting to deal with the heroic battle-wounded, found himself instead trying to cope with ‘death in its vilest, filthiest form’. The stench of the disease could be smelled from six miles away. Rudyard Kipling, who had also travelled to the Cape named the town ‘Bloomingtyphoidtein’. 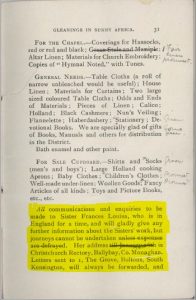 As part of the fundraising tour she is noted in the Dundee Courier, Thursday 11th September 1902 as follows – BLAIR ATHOLL – Lecture – On Tuesday evening Sister Frances Louisa gave in the Public School am most interesting and instructive account of the “ War and Its Effects on Mission Work”…. A collection was taken in aid of the Missions” 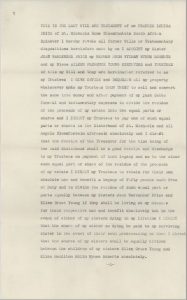 Frances Louisa Price was born into the large family of her Solicitor father in 1863. She died in Camberwell House, Peckham in 1938. A copy of her last will and testament and associated files reveal family details which will enable detailed further research.

Sister Frances Louise is recorded as a passenger on the Edinburgh Castle in 1925 from Cape Town to Southampton. Listed as a Sister of Charity, aged 62 years, she is listed as visiting Cannon Young, her brother-in-law, of Victoria Place, Grosvenor, Bath.

There are understood to have been circa 2015 Nurses in the Anglo Boer war of which 64 are known to be from Religious Orders. This medal is one of 12 on the medal roll for St Michael’s Home, Bloemfontein. 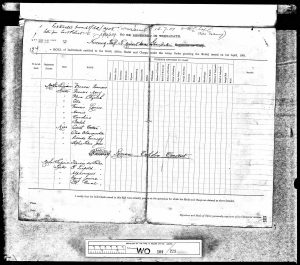 It is noted that her name is spelled differently in records and reports. Frequently her name Frances Louisa can also be seen as Frances Louise. The medal roll uses the spelling Francis Louise.

She was the daughter of Hamilton Robert and Elizabeth Price and was one of many children. The family moved from London to Denbighshire, Wales. Of note, her sister Ellen Grace Price married the Reverend (later Cannon) Augustus Blaney Young.

Their address at County Monaghan, Ireland being the same address as one given by Sister Frances Louisa in the aforementioned Gleanings from Sunny Africa pamphlet and on the passenger manifest of her voyage back from South Africa. They later moved to Bath, Somerset. Ellen and Augustus’ daughter Aileen Florence Young was an executor of the Last Will and Testament of Sister Frances Louisa.

The photographic image shown lists, on the reverse, the names of the subjects in the photograph of which 5 were Mentioned in Lord Roberts’ Despatch and appear on the medal roll, including Mother Superior. 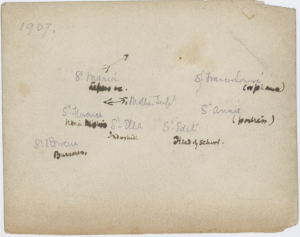 Of historic interest in the life, times and history of St Michael and All Angels is the important role played by Sister Henrietta Stockdale . Sister Henrietta being seen as the foremost Nursing Pioneer in the Cape.

This medal uniquely opens the door to an extensive research project into the role of Religious Orders nursing in the Anglo Boer War, in their Religious influence in the Cape and the life and times of the recipient Sister Frances Louisa.

Payment by Bank Transfer preferred ( Sort Code 30-94-41, Acct No. 48469068 ) IBAN and Swift numbers upon request. Card payment can be taken on application. PAYPAL WILL NOT BE ACCEPTED (any payment will be returned).