Unusual opportunity to buy these fine caricatures of the pre-eminent Hymn creators of the 19th Century. 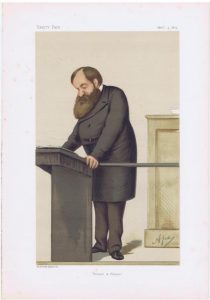 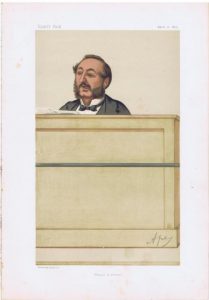 Mr. Ira D. Sankey Vanity Fair Print . Original Lithograph with the caption at the bottom of the print: Praise & Prayer

Mr. D.L. Moody Vanity Fair Print . Original Lithograph with the caption at the bottom of the print: Prayer & Praise

Although the publication was and is popularly known as Sankey and Moody’s Songs, or The Sankey-Moody Hymnbook, the tunes and lyrics are by other authors. The lyrics and melody to “Home at last, thy labour done” are by Sankey, providing some new tunes to other lyrics.

Starting after their meeting in June 1871, the team of Sankey and Moody compiled Christian songs and traveled throughout the United States and the United Kingdom calling people to God through their use of song, with Moody preaching and Sankey singing. Together they published books of Christian hymns. Moody had started in Christian ministry as a Sunday School teacher in Chicago. His application to teach Sunday School in his church was rebuffed, but undeterred he rounded up children from the city streets and soon had a Sunday School several hundred strong. Later, Moody was to be challenged by the event of the Great Chicago Fire. The Sunday before he had preached a moving sermon on human sinfulness. He concluded his sermon by announcing that the following Sunday he would explain how sins could be forgiven. Many of his congregation never returned, having perished in the fire. From that moment Moody vowed never to close a meeting without giving the congregation an opportunity to respond to his gospel message. The format of the meetings with Sankey acting as song leader and singing while accompanying himself on an American Organ became a template for many evangelists in the 20th Century including Dr. Billy Graham. Sankey’s rousing hymns and solos softened hearts before Moody preached. (wikipedia)

They came to the United Kingdom in 1875, first in Scotland, and attracted large crowds.