Battle of the Ruhr and Pathfinders DFC, DFM medal pair with Log Book and other original items to a Warrant Officer air gunner.

77 Operational Flights by Squadron as follows:

His Log Book is completed in a matter of fact and unembellished way without revisions or later additions. The book also reveals that during his tour with 582 and later 7 Squadrons he flew many Ops with renowned Pathfinders Wing Commander Derrick Milner Walbourn DSO, DFC and Bar and his log book has been signed off by Walbourn. 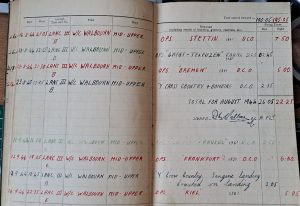 Notably, with Wing Commander Walbourn as Captain and Beaton as Mid-Upper Gunner in Lanc III “B”, they took part in the attack on Westkappelle, Walcheren (Operation Infatuate, Battle of the Scheldt) to break the dyke and “sink” the island on 3rd October 1944. Beaton made a rare note in his log at the time that they “circled (the) target 2 hours”.

In November 1944 the Walbourn crew, now with 7 Squadron A Flight, with Beaton, flew numerous operations as Master Bomber in Operations over German targets.

Earlier in his first operational tour with 10 Squadron his Halifax was noted as damaged by flak whilst bombing Berlin in a raid of 302 aircraft. The crew made a safe return to Melbourne airfield.

This pair is one of 418 such DFC, DFM medal pairs issued – this one to Beaton is more unusual in the the DFC is to the rank of Warrant Officer. 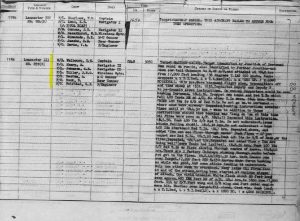 Distinguished Flying Cross – 1945 dated. In Royal Mint box of issue. It is of note that the DFM has been kept in the same box for many, many years and an impression of the DFM can be seen embedded in the silk of the DFC box lid.

Air Gunner’s Flying Log Book – Detailing his training up until his first operation 13th February 1943 to Lorient until his final and 77th Operation of food dropping (Op Manna) 1st May 1945. Full list of Ops below. The log book also covers his several flights in 1947.

Discharge Certificate – This original document confirms the awards of both the DFC and DFM and that he was physically unfit for Air Force Service as a Gunner. 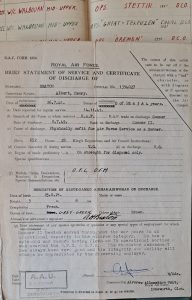 Airman’s Service and Pay Book information for 1394027 Beaton confirms his date of birth 25th June 1921. He was Church of England. And a Capstan Operator in civilian life. He attested 11th July 1941 and was mobilised 26th July 1941. Pay book notes awards of DFM, DFC, Chevrons and Ribbons. 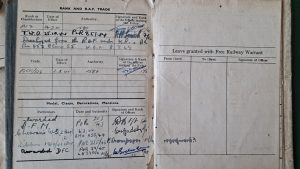