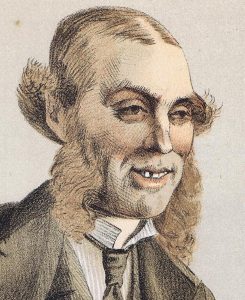 Original Lithograph with the caption at the bottom of the print: The Police Champion

Famously advocated the need for a Police Minister.

Robert Eykyn was born on 21 October 1830. He was the son of Richard Eykyn of Crouch End, Middlesex, and Ackleton, Shropshire and his wife Susanna Starr, daughter of Sir William Starr, of Canterbury, Kent. Eykyn was a J.P. for Berkshire, and a cornet in the Royal Buckinghamshire Yeomanry Lancers.

In 1866 Eykyn was elected at a by-election as a Member of Parliament (MP) for Windsor after the return of the previous general election was declared void. He held the seat until his defeat at the 1874 general election.