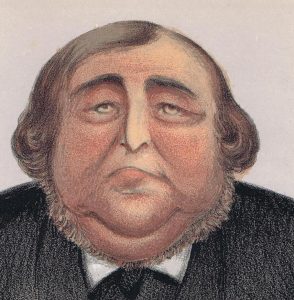 Original Lithograph with the caption at the bottom of the print: Baronet or Butcher

The Tichborne Case, Roger Tichborne, heir to the family’s title and fortunes, was presumed to have died in a shipwreck in 1854 at age 25. His mother clung to a belief that he might have survived, and after hearing rumours that he had made his way to Australia, she advertised extensively in Australian newspapers, offering a reward for information. In 1866, a butcher known as Thomas Castro from Wagga Wagga came forward claiming to be Roger Tichborne. Although his manners and bearing were unrefined, he gathered support and travelled to England. He was instantly accepted by Lady Tichborne as her son, although other family members were dismissive and sought to expose him as an impostor. During protracted enquiries before the case went to court in 1871, details emerged suggesting that the Claimant might be Arthur Orton, a butcher’s son from Wapping in London, who had gone to sea as a boy and had last been heard of in Australia. After a civil court had rejected the Claimant’s case, he was charged with perjury; while awaiting trial he campaigned throughout the country to gain popular support. In 1874, a criminal court jury decided that he was not Roger Tichborne and declared him to be Arthur Orton. Before passing a sentence of 14 years, the judge condemned the behaviour of the Claimant’s counsel, Edward Kenealy, who was subsequently disbarred because of his conduct. After the trial, Kenealy instigated a popular radical reform movement, the Magna Charta Association, which championed the Claimant’s cause for some years. Kenealy was elected to Parliament in 1875 as a radical independent but was not an effective parliamentarian. The movement was in decline when the Claimant was released in 1884, and he had no dealings with it. In 1895, he confessed to being Orton, only to recant almost immediately. He lived generally in poverty for the rest of his life and was destitute at the time of his death in 1898. Although most commentators have accepted the court’s view that the Claimant was Orton, some analysts believe that an element of doubt remains as to his true identity and that, conceivably, he was Roger Tichborne.