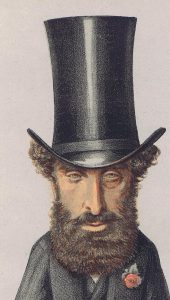 Original Lithograph of Lord Lytton with the caption at the bottom of the print: The Representative of Romance

was an English statesman and poet (under the pen name Owen Meredith). He served as Viceroy of India between 1876 and 1880, during which time Queen Victoria was proclaimed Empress of India. An accomplished and popular diplomat, Lytton was afforded the rare tribute – especially for an Englishman – of a state funeral in Paris, although as Viceroy of India he has been criticised for his handling of the Great Famine of 1876–78 and the Second Anglo-Afghan War. His son Victor Bulwer-Lytton, 2nd Earl of Lytton, who was born in India, returned as Governor of Bengal and was briefly acting Viceroy