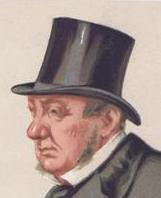 Original Vanity Fair Print Lithograph of Richard Lyons, 1st Viscount Lyons with the caption at the bottom of the print: Diplomacy

He was an eminent British diplomat, the favourite of Queen Victoria. Lyons was an imperative element of British diplomacy during each of the four great crises of the second half of the 19th century: Italian unification, the American Civil War, the decline of the Ottoman Empire, and the replacement of France, by the unified Germany, as the dominant Continental power. He is best known for solving the Trent Affair during the American Civil War, for laying the foundations for the Special Relationship, and for predicting, 32 years before World War One, the occurrence of an imperial war between France and Germany that would destroy Britain’s international dominance.

Free postage to mainland UK. Overseas buyers please contact us to agree shipping. Note that these lithograph prints are all in excess of 100 years old. There may be minor imperfections commensurate with age. Please do not hesitate to ask questions about shipping or condition.