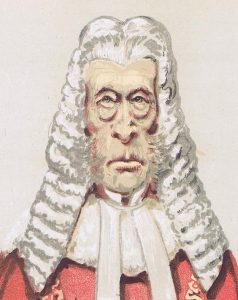 Original Lithograph of The Right Honourable Sir Frederick Pollock with the caption at the bottom of the print: A Souvenir

He was educated at Eton College, where he was a King’s Scholar, and Trinity College, Cambridge, where he was elected Fellow in 1868 (later Honorable Fellow in 1920). In 1871 he was admitted to the Bar. He wrote a series of text books that took a new approach to the teaching of English Law including The Principles of Contract at Law and in Equity (1876) and The Law of Torts (1887). Rather than relying on specific applications of law these works emphasised underlying principles. They acted as models for future textbooks and helped modernise English legal education. Pollock taught at the University of Oxford (1883–1903), as Corpus Professor of Jurisprudence. He was Professor of Common Law in the Inns of Court (1884–1890). He was Editor of the Law Reports from 1895 to 1935. He was the first editor of the Law Quarterly Review which was founded in 1885. He was also, in 1894, the Chairman of The Society of Authors. He was admitted to the Privy Council in 1911.[6] He was elected Treasurer of Lincoln’s Inn in 1931. On 13 August 1873 he married Georgina Harriet Deffell (died on 30 March 1935), a daughter of John Deffell. Their first child, daughter Alice Isabella was born on 15 June 1876. Pollock’s son, Frederick John Pollock (1878–1963), a noted historian, succeeded to the baronetcy (wikipedia)

see image for small satin on right side of print, hence price.