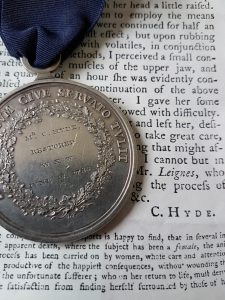 RARE & EARLY AWARD For the successful resuscitation of a drowned woman 1786. Here is one of The Large, Type 1, Royal Humane Society medals as issued between 1774 and 1837. It is the first type as designed by LEWIS PINGO. Note the LP at the base of the scroll on the reverse of the medal. 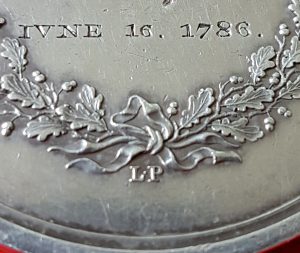 The IVNE being in the Latin Form standing for June 16th 1786, the date of the incident. The records of the incident, as can be seen from copies of the original citation are as follows: 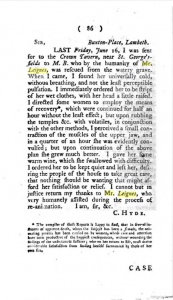 The body of a woman (M.B.), apparently already dead, was recovered from the River Thames by Mr John Charles Leignes after he had heard her throw herself into the river. Mr Leignes sent for Mr Charles Hyde who supervised the resuscitation.

The account offers a fascinating insight into the Social History of the times. Surgeon Charles Hyde, in his account, describes the life saving process. A footnote from the compiler of the report describes how Surgeon Mr Charles Hyde supervised the process by instructing four women to carry out the intimate life saving actions in order to save the victim from “wounding of her feelings” and that she was resuscitated by women, having been stripped by them under the instruction of Hyde. Hence the medal inscription W.X.W.

There are many documents available to assist further detailed research of Mr Charles Hyde. Research indicates that this Charles Hyde was a Surgeon in Lambeth, London.  At the time if the incident he was of Buxton Place, Lambeth.

He married Ruth Shiells (1766–1834) and there is a document that is an agreement between her father and Mr Hyde (see images).

Also to be found are numerous entries confirming that over many years he took on Apprentices, all individuals could be worthy of further research.

Further research reveals that he was Victim and Accuser in a case at Surrey Quarter Sessions of 1812 involving the theft of lead roofing from his home at Moore Place. Other witnesses were two Bow Street Runners.

As an absolutely superb opportunity to uncover Social History of the late 18th Century, this is a highly researchable ROYAL HUMANE SOCIETY MEDAL medal which was issued within 12 years of its inception. It is of the first type design by Lewis Pingo.

Charles Hyde died in 1823 and was buried 28th May 1823 at St Mary’s Lambeth. This is also the resting place of the Elizabeth Boleyn, mother of Anne Boleyn, Captain William Bligh of Mutiny on the Bounty fame and 5 former Archbishops of Canterbury.

It is also of note that Mr John Charles Leignes, the individual who recovered the victim from the River Thames was a noted artist in Chalks and Pastels and a biography confirms his part int the rescue of a woman from the river. He was also commissioned as a Lieutenant in the East Regiment of The London Militia.