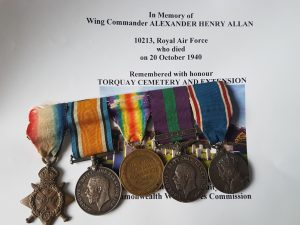 A very interesting multi-service WW1 / WW2 group to a WW2 casualty.
A fascinating WWII casualty group to Wing Commander A. H. ALLAN, covering many aspect of his time on the services. This includes a rare Territorial Force 1914 Mons star Trio, earned in the ranks of the 9th Highland Light Infantry (Territorial Force, aka The Dandy Ninth, with a rare IRAQ clasp GSM for operations 10th December 191- 17th November 1920 earned as The Stores Branch Officer with 55 Squadron, RAF. The significance of this culminated in the rank of Wing Commander with the RAF’s Advanced Air Striking Force in the defence and subsequent Battle of France September 1939 to May 1940.
The medal group consists of:
1914 “Mons” Star named to: 1339 L. CPL. A. H. ALLAN. 9 / HIGH; L. I.
BWM and Victory Medal named to: 1339 Sjt. A. H. ALLAN. H. L. I.
GSM with IRAQ Clasp named to: F / O. A. H. ALLAN. R. A. F.

1937 Coronation Medal – unnamed as issued.
The above are mounted on a bar, as worn.
1939 / 45 Star – unnamed as issued, mint, still in wrapper
War Medal – unnamed as issued, mint, still in wrapper
On the 8th March 1911, aged 20 years, he joined the ranks of the 9th (Glasgow Highland) Battalion, The Highland Light Infantry (Territorial Force). He was mobilised 5th August 1914 on the outbreak of war.
He had been appointed Corporal and embarked for France 5th November 1914. The Dandy Ninth, as the Battalion was nicknamed, fought in the many battles around Ypres, the Somme, Arras, Passchendaelle etc. Alexander rose to the rank of Serjeant during the First World War.
In October 1918 he received a Commission, as a Flying Officer, into the newly formed Royal Air Force. In 1920 he was appointed as the Stores Officer to 55 Squadron (DH(s) in Turkey and the Middle East, and served in Iraq with the Squadron during the troubles, 1920 – 1922.

In 1937, he was amongst the few RAF Officers to be bestowed a 1937 Coronation Medal, receiving his as “Squadron Leader, Commanding Officer, R.A.F. Equipment and Supply Depot, British Forces on Aden.”

Whilst fulfilling duties at RAF Cranwell on the 1st April 1939, Allan was promoted to Wing Commander. Later that year, upon the outbreak of war again with Germany in early September he was
assigned to Headquarters, Advanced Air Striking Force on France.
With the oncoming German Army and Luftwaffe attacks he would have overseen the destruction of non-serviceable aircraft, stores and equipment. He remained in Theatre until 18th May 1949.
He was posted, in the UK, to RAF Compton Bassett, where he was taken sick. He died of stress-related illness 20th October 1940 at the RAF Officers’ Hospital, Torquay, Devon. He was 50 years old at the time and was buried with Military Honours in the Torquay Cemetery.
It is widely known that during the period of the Fall of France and throughout the subsequent Battle of Britain, physical and mental stress, throughout the RAF Command was extremely high.
His death was reported in the Times on the 25th October 1940. His obituary appeared in the Times 3 days later.
This group comes with a file of extensive research and downloads.
Free postage to mainland UK. Overseas buyers please contact us to agree shipping.