The Grand Old Man of English cricket and Manager of the infamous Bodyline Tour of Australia. 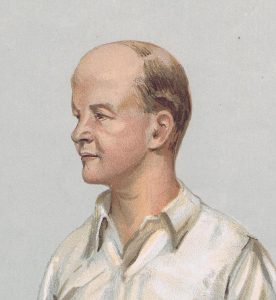 Warner was born in Port of Spain, Trinidad. His mother, Rosa Cadiz, was of Spanish origin, his father of an English colonial family. He was educated at Harrison College, and then sent to England to Rugby School and Oriel College, Oxford.

As a right-hand batsman, Warner played first-class cricket for Oxford University, Middlesex and England. He played 15 Test matches, captaining in 10 of them, with a record of won 4, lost 6. He succeeded in regaining The Ashes in 1903–04, winning the series against Australia 3–2. However he was less successful when he captained England on the tour of South Africa in 1905–06, suffering a resounding 1–4 defeat, the first time England had lost to South Africa in a Test match. He was also to have captained England on the 1911–12 tour of Australia, but fell ill. He was unable to play in any of the Tests, with Johnny Douglas taking over the captaincy.

He is the only batsman to carry his bat through the innings in his first Test match.

, making him one of two to have received the honour twice (the usual practice is that it is only won once: the other is Jack Hobbs)

He became a Cricket tour manager, most notably on the infamous “Bodyline” tour of Australia in 1932–33. He was the chairman of the England Test selectors for several years in the 1930s. He later became President of the Marylebone Cricket Club.