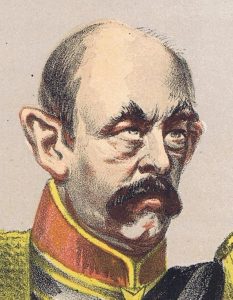 Original Lithograph of Count Von Bismarck-Schoenausen with the caption at the bottom of the print: The Ablest Statesman in Europe 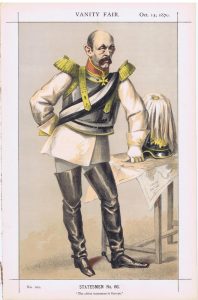 A 2011 biographer of Bismarck wrote that he was a political genius of a very unusual kind [whose success] rested on several sets of conflicting characteristics among which brutal, disarming honesty mingled with the wiles and deceits of a confidence man. He played his parts with perfect self-confidence, yet mixed them with rage, anxiety, illness, hypochrondria, and irrationality. … He used democracy when it suited him, negotiated with revolutionaries and the dangerous Ferdinand Lassalle, the socialist who might have contested his authority. He utterly dominated his cabinet ministers with a sovereign contempt and blackened their reputations as soon as he no longer needed them. He outwitted the parliamentary parties, even the strongest of them, and betrayed all those … who had put him into power. By 1870 even his closest friends … realized that they had helped put a demonic figure into power (Bismarck: A Life By Jonathan Steinberg)