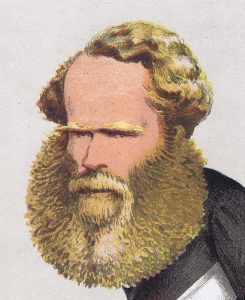 known as M. E. Grant Duff before 1887 and as Sir Mountstuart Grant Duff thereafter, was a Scottish politician, administrator and author. He served as the Under-Secretary of State for India from 1868 to 1874, Under-Secretary of State for the Colonies from 1880 to 1881 and the Governor of Madras from 1881 to 1886. He was born in Eden, Aberdeenshire, on 21 February 1829 to the distinguished British historian James Grant Duff. He had his education at Grange School and Balliol College, Oxford and graduated in law from the Inns of Court. He practised and taught law for a short time before starting a political life and entering the House of Commons as the Liberal Member of Parliament for Elgin Burghs. His abilities won him government positions and he was Under-Secretary of State for India, Under-Secretary of State for the Colonies and Governor of Madras. On his return from Madras, he retired from politics and served in various art and scientific societies. He travelled extensively and wrote voluminously. His performance in politics and administration has received mixed reviews during the 1880s a politician of brilliant promise and scant performance, of wide information which he seemed to turn to much account, of abilities which would have made the fortunes of half a dozen men and of which he made little enough. He was made a Companion of the Order of the Indian Empire and a Grand Commander of the Order of the Star of India. He died on 12 January 1906 at the age of 76.

Original Lithograph with the caption at the bottom of the print: A Philosophic Liberal,