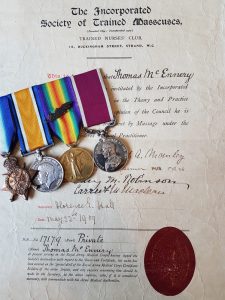 1)            RAMC Certificate of Training as a Nurse. Date 1905 this confirms Private McEnnery has completed his 3 years training in the Medical and Surgical Wards of a 1st Grade Military Hospital. 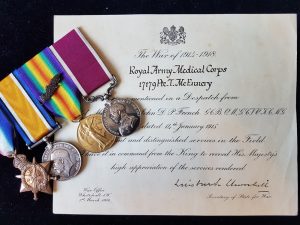 2)            Certificate from The Incorporated Society of Trained Masseuses, Trained Nurses Club. Dated May 22nd 1909, this certifies that 197179 McEnnery has passed the relevant examination to qualify as a Masseuse. 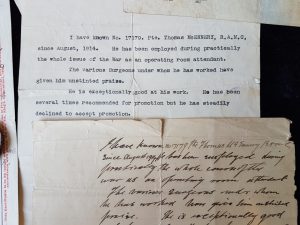 6)            The handwritten original and a typed version of a Testimonial written by M H Babbington. Lt-Col RAMC O.C. No 40 Stationary Hospital.

These are the medals of a long serving Royal Army Medical Corps soldier who was, rarely, a highly trained and qualified nurse who had a proven medical track record prior to the First World War. He obviously was a dedicated man who earned a Mention in Despatches. The medals have been laid on card.